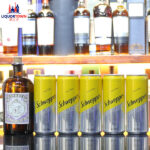 The Monkey Tonic is a play on a gin and tonic with a hint of grapefruit and fine Fever-Tree tonic.

The Monkey Tonic is a play on a gin and tonic with a hint of grapefruit and fine Fever-Tree tonic.

First created as a from of medicine in Holland in the 17th century, the classic G&T was called Genever, a reference to juniper in Dutch. The Genever was very different to the usually clear libation that we have come to know as a G&T today. It didn’t take long though for Genever to be loved and highly demanded, as medicinal properties were also attributed to it.

By the middle of the century, gin became huge with some 400 distilleries in Amsterdam alone. In 2008, the Black Forest Distillers adopted the gin recipe of Royal Air Force Wing Commander Montgommery Collins, naming their new gin Monkey 47 in memory of Collin’s monkey Max and as a nod to the number of botanicals used and the gin’s alchohol volume. One third of the ingredients are believed to be handpicked from Collin’s back garden. Thus, a series of unconventional flavors, such as blakberries, sloes, verbena and sage are added to this unique gin.

Build in your favorite G&T glass over ice and garnish with a grapefruit twist.