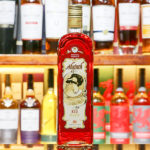 Fruko Schulz Red Absinth is a half litre of madness for any of those crazy types that want to go and “chase the green fairy”.  Absinth is of course the stuff of legends and is probably responsible for more urban myths about alcohol than any other drink.

Fruko Schulz Red Absinth is a half litre of madness for any of those crazy types that want to go and “chase the green fairy”.  Absinth is of course the stuff of legends and is probably responsible for more urban myths about alcohol than any other drink.  We have it here, and we have it  as  cheap as can possible be.  This style of Absinth is made in the Czech Republic.

Remember girls and boys, Liquor Town IS about responsible drinking so we have to give you a bit of a warning here about the basics.  This is a 70% ABV spirit – that’s almost twice as strong as your average hard liquor (which are typically 35%-40% ABV).  So, remember, you will need to use at least double your normal amount of mixer.  Typically with Absinth that would be water.

There are no points for being a hero, and people will not think you’re a bigger man if you start doing this stuff as shooters.  It’s not big and it’s not clever.  If you’re new to Absinth, get on the interwebs and read up about it before you start chugging this stuff.  It’s got a kick to it like very few other things in the world can compare with.

Absinth is historically described as a distilled, highly alcoholic (45–74% ABV / 90–148 U.S. proof) beverage.  It is an anise-flavoured spirit derived from botanicals, including the flowers and leaves of Artemisia absinthium (“grand wormwood”), together with green anise, sweet fennel, and other medicinal and culinary herbs.   Absinthe traditionally has a natural green colour but may also be colourless. It is commonly referred to in historical literature as “la fée verte” (the green fairy). Although it is sometimes mistakenly referred to as a liqueur, absinthe is not traditionally bottled with added sugar; it is therefore classified as a spirit.   Absinthe is traditionally bottled at a high level of alcohol by volume, but it is normally diluted with water prior to being consumed.

Straight From The Mayor

Despite my reputation as being some crass, hedonistic, hard drinking party animal, I do have at least some standards when it comes to drinking.  This never gets onto my shopping list, unless I’m buying a gift for some random jingley that I really don’t like but know I’ll take pleasure in watching their eyeballs swell as they puke up their ring.

Absinth appeals to everyone between the age of 14 and 22 (depending on how strict your parents were while growing up) to try at least once.  Then the sane people realise it’s actually a vile and disgusting drink and never drink it again.

Very few people continue to drink this past their first expereince – normally people with addictive personalities that turn into the village drunk and sleep in the local park under a bush, with their entire life in a shopping trolley.  You know the type.  Some of you are heading there already…..

Only logged in customers who have purchased this product may leave a review.