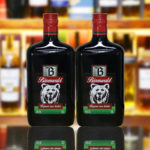 Jager Beater is essentially 2 bottles of “german herbal liquor” for the price of 1 bottle of Jagermeister.  Sure, this does look a little bit like Liquor Town is selling its soul out for copycat brands but we justify it on this product with solid quality at a pocket-friendly price.

Jager Beater is essentially 2 bottles of “german herbal liquor” for the price of 1 bottle of Jagermeister.  Sure, this does look a little bit like Liquor Town is selling its soul out for copycat brands but we justify it on this product with solid quality at a pocket-friendly price.

We consider the promotion of a more cost-effective alternative as a service to liquor lovers all over China.

This is made in pretty much the same way as the traditional Jager with a couple of exceptions.  There are apparently only 52 herbs in this (Jager is 56), this one is matured in barrels that previously held cognac (Jager barrels are rumours to have been used previously for brandy) and this version is actually made in France (Jager is German).

First and foremost, as everyone knows, I’m cheap and I have no shame in that.  But I wouldn’t drink cheap booze just to save money.  If the quality isn’t’ there, then I ain’t interested.  To understand Jager Beater, you have to understand what Jaeger actually is.  It’s base alcohol, that is infused through maceration with herbs.  Frankly, there are truckloads of Jager copies but most of them are quickly identified as being crap quality base liquor and rarely use real herb – they use artificial flavours and never age the product in barrels as Jager is.

Jager Beater does stand out as being decent.  Sure, the label looks crap and the branding was probably done at a nursery school, but all we should care about is the liquid.

This is clear, deep amber in colour with some burgundy wine coloured highlights.  It’s got obvious viscosity to it (which lack of sickly sweetness proves that it’s real herbs and oak barrels giving the body to the liquid).

It has that traditional Jager nose.  Herbs, not too medicinal.  Some stewed fruits, cherries and cola tones.  Liquorice is in there with some cherry blossoms.

The flavour is all there.  Sure, most of you will bury it under energy drinks and slam this as a party drink.  But if you don’t, this has cola, liquorice, dark chocolate, prunes, damsons, sloe berries, cinnamon, ginger, aniseed and a touch of pepper.

Only logged in customers who have purchased this product may leave a review.