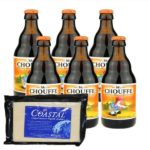 McChouffe With Coastal Cheddar cheese is a perfectly paired combination of a Belgian Abbey beer with one of the finest examples of a huge 400g slab of 15-month aged cheddar.  The 6 beers are normally ¥119 and the cheese is ¥68.88 – buy them together and you get a decent discount.

McChouffe With Coastal Cheddar cheese is a perfectly paired combination of a Belgian Abbey beer with one of the finest examples of a huge 400g slab of 15-month aged cheddar.  The 6 beers are normally ¥119 and the cheese is ¥68.88 – buy them together and you get a decent discount.

McChouffe is the dark brother to the famous blond La Chouffe and first hit the market back in 1987.  McChouffe aims to steer a middle course between a traditional dark Abbey beer, belonging to the ‘dubbel’ beer style, and a Scotch ale (although the latter generally offers a more pronounced malty taste than see in the Mc Chouffe).

Mc Chouffe is brewed with all-natural ingredients: water, yeast, pale barley malts, Saaz-Saaz and Styrian Golding hops. The beer also contains dark candy sugar.  Just like the La Chouffe, the Mc Chouffe is a high fermentation beer that re-ferments both in the barrel and in the bottle. After the main fermentation and storage, re-fermentation is promoted by the addition of yeast and sugar, just prior to bottling.

The Mc Chouffe takes on a deep brown colour when the dark candy sugar has done its work. This unfiltered beer also has a cloudy appearance, contrasting nicely with its rich white-collar, showing lovely tiny pearls. You can serve the yeast along with the beer.  When swirled, this inviting ale smells of caramelized malts, sweet toffee, candied cherries, raisins, plums, vanilla and warming alcohol vapour.  Lively with substantial carbonation and a thick, fluffy, off-white head that settles quickly, this dark brown, opaque brew has a hint of ruby sparkle.

Due to the fact that Coastal Cheddar is aged for up to fifteen months which bestows it with its rich and intense flavour but the culture used also adds a contrasting subtle, sweet, top note.  From time to time, you may encounter a characteristic ‘crunch’ when you bite into this cheddar – a consequence of the calcium lactate crystals which form naturally as the cheddar ages.

The McChouffe With Coastal Cheddar Pairing

With the beer served chilled and between 6 and 10 degrees, we would suggest serving the cheese with a selection of dry and plain tasting crackers or some really crusty French baguette-style bread.  This cheese is very rich in flavour so it needs a full-bodied and complex beer to stand on an equal footing.  The cheese would simply overpower one of those water lager-styled beers.