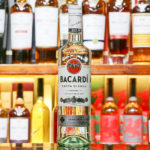 A classic white rum with distinctive vanilla and almond notes developed in white oak barrels and shaped through a secret blend of charcoal for a distinctive smoothness.

Bacardi Carta Blanca  is a classic white rum with distinctive vanilla and almond notes developed in white oak barrels and shaped through a secret blend of charcoal for a distinctive smoothness.  From its humble beginnings in Cuba in 1862 as a molasses based clear rum, it has underpinned the expansion into more than 200 different labels.  The 1960 Cuban Revolution, and the seizure of all private assets couldn’t keep these guys down.  They were smart enough to start branching out a few years before and had enough production outside of Cuba to minimise the impact of Castro’s questionable politics.

Enough of the history lesson.  What matters is simple.  As a cheap as chips house pour clear rum or something to put a bit of kick in you cola, it doesn’t really get any better at this price range than Bacardi Carta Blanca.  If you want to have a fiddle around at home with some rum cocktails, then this is your starting bottle.

Nose: Very fresh, with zippy lemon notes to the fore and a hint of pear drops.

Straight from the Mayor

Bacardi Carta Blanca is probably the biggest name in rum across all categories.  If you haven’t heard of it, then you probably need to get out a bit more.  It’s not the most exciting rum in the world and probably isn’t the best tasting.  But, you get what you pay for.  At this price point, it’s a winner.

Be the first to review “Bacardi Carta Blanca” Cancel reply