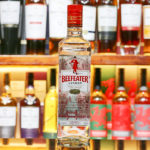 There is no such thing as a gin drinker that hasn’t experienced Beefeater.  Before all the hand crafted gins started popping up like wild mushrooms in a wet forest, Beefeater was one of only a handful of really drinkable gins.

If only it wasn’t owned by the Frenchies…..

There is no such thing as a gin drinker that hasn’t experienced Beefeater.  Before all the hand crafted gins started popping up like wild mushrooms in a wet forest, Beefeater was one of only a handful of really drinkable gins.  It is a good value, extremely high quality, icon of the gin drinking world and of London itself.  The name Beefeater comes from the slang name for the Yeoman Warders, who are the ceremonial guards at the Tower of London.

Beefeater’s history can be traced back to 1862, when James Burrough, born 1835, bought the Cale Street-based Chelsea distillery from Rectifier & Compounder, John Taylor, for the sum of £400 and started to produce his own distinctive style of gin by 1863. At first, the distillery continued with the production of liqueurs as previously started by its previous owners, further establishing its reputation and extending its customer base.

The 1876 company stock lists showed an increasing portfolio of gins with brand names such as Ye Old Chelsea and James Bourrough London Dry, as well as Old Tom styles. By spending time experimenting, inventing and using new processes he discovered that blending a particular recipe of botanicals produced a bold, full-flavoured gin, which he named Beefeater Gin.

After the almost instant success of the gin, it was soon made the James Burrough Company’s flagship product. The original Beefeater recipe book dated 1895, specifies that nine botanicals are essential (juniper, angelica root, angelica seeds, coriander seeds, liquorice, almonds, orris root, seville oranges and lemon peel) to create the full-bodied and robust flavour so distinct in this gin.

A light citrus creates a soft hit on the nose, with juniper following slowly after with a very light hint of spice. A long aftertaste after a more dominant hit of lemon citrus on the palate.

From an empty bottle, filled with any other gin.

I can’t knock Beefeater.  It ain’t bad gin.  I just avoid it out of spite because it’s owned by those Frenchies….